Groundbreaking and revolutionairy ideas in the monetary system - By Michel Laloux

An article by Stéphane Lejoly
Translation : Philippe E. A. Lheureux

French versions of this article with small variations can be found on the economiematin.fr and tri-articulation.info websites.

No Government, Parliament, political movement, State or people, can substantially modify their laws or application modalities, or take certain decisions, without being immediately confronted to the verdicts of financial markets: in whatever domain, any measure which would be too unfavourable to them, be it directly or indirectly, would inevitable lead to, and this within a very short delay, to a tendency to reduce their investments, to withdraw capital and to increase the interest rates on the loans they consent.

As long as this problem, amongst others, wouldn’t be “resolved” at its root, it will remain impossible, even with the best political and/or popular vote, to get out of the current rut, which constitute the soil on which flourishes disastrous financial, economic, social, cultural crisis’s such as we know them.

Are we in front of a situation with definitely no issue or does there exist one or more credible solutions to get out of this dead end?

A French-Swiss economist, Michel Laloux[1], has developed at least one solution in an astonishing book: “Dépolluer l’économie – Tome 1 – Revolution within the Monetary System”. One of the many leading thoughts contained within this book consists in forming the value of money of financing of the economic life (financing of investments) essentially on the basis of the future, it is to say on the productive activity to come of the enterprises to which loans are consented, and not any more based on money and capital that are accumulated, and as such result from past actions.

If it would be possible to generate concretely a Money of Financing based on this principle, then people could express themselves as follows in regards the financial markets: “You can keep your money and your capital… we don’t need it anymore for financing our economy”.

If the ideas of Michel Laloux prove to be thoroughly founded and operational, then his book could well constitute one of the most subversive documents written since decades: he doesn’t make do with denouncing, as it is usually the case, the injustices, or to diagnose unhealthy processes within the economy and even not with merely proposing avenues for remediation (of which there exist certainly alternatives within many a book, but which however remain at the surface of things without ever modifying anything fundamental, while they remain, in the end, within the same paradigm as the one they intend to reform). In our sense, his essay goes much deeper: there he formulates a totality of very innovative, concrete and precise concepts which allow, not only to identify certain systemic causes of the cancer which hits the economy, but also, and especially, which go as far as to conceptualise “remedies” that are quite radical and vigorous. The understanding and the implementation of those ideas on a sufficiently large scale should be able to finish off with the ever-present power of the financial markets.

But in what does this so revolutionary “future oriented” Financing Money consist of, which is described in detail from chapter 19 onwards in his book, and with a format that is already almost operational? This “future oriented money” can’t be understood without first starting to rethink on a totally different basis, more real this time, the notion of money/currency itself.  The author adopts then also, and to this end, a rigorous phenomenological approach, which he applies in the observation of the Real Economy.

He shows therefore within the first chapters how, in a general manner, when money/currency is not any longer considered as being the equivalent of a commodity which can be stocked (and accumulated) at will, but only as a simple unity of measure (a pure accounting scripture) allowing to quantify and exchange, during a limited amount of time, certain “rights to consume” of economic values, and which emission is determined by the sole needs and functioning of the Real Economy itself, so that then this currency/money can not feed and reinforce the speculative economy.

The latter is a virtual economy, which constitutes a cancer of the Real Economy, which she pollutes, poisons and slowly destroys. With this notion of currency/money as accounting scripture, it becomes impossible to make money with money…

To this concept of “money-as-accounting” another innovative specificity is added, namely the differentiation in three “types” of monies which actually also circulate currently within the economy, but are usually confounded, mixed up with each other:
(1) Firstly, that currency/money whose function is related to the daily and current consumption (which he calls Money of Consumption),
(2) Secondly, that currency/money whose role is the financing of productive investments (Money of Financing),
(3) And thirdly, the currency/money destined to the non-merchant economy, and which he calls Contribution Money (other authors talk in this regard of “gift” money or currency).

Michel Laloux goes much further then a simple conceptual differentiation between these three types or functions of currencies/monies: he shows why there is a necessity to make each kind of money circulate within its own particular circuits according to its own specific criteria and how this circulation can be operated, so as to be efficient, by separating and compartmentalising each of the three circuits, however with gateways between them.

It is not our aim here to summarize in a few pages that which can only be grasped through a direct reading of his book, which is very pedagogical and accessible even to those who are not economists by training.

Let us note however that once the innovative conceptual basis is established of “money as-scriptural-accounting” as well as of the triple monetary circulation (which is barely outlined here above), we discover that there results possibilities for very deep changes within the monetary system, including on the international level, of which the positive repercussions within the economy and within social life would be of a great amplitude.
Amongst these changes, which are rigorously described by the author, and of which some of them are to say the least “genial”, let us mention for example the following:

In short, the reader shouldn’t be afraid to transgress many taboos of the current economic « thinking » if he wants to become aware of the substance of Michel Laloux’ book. He should on the contrary be prepared to “think the unthinkable”.

He would certainly also have to enter with patience within this book, while the ideas which are presented in it (with clarity and coherence) constitute an innovative global picture, whose framework (fabric) forms a new paradigm for social, economic and cultural life. But how to lay out such innovative concepts? Where to start? How to order them into a coherent whole? Michel Laloux has undertaken this perilous exercise and has succeeded in it, in my opinion.

Further, Michel Laloux is of course well aware that a change in a paradigm can’t be considered by giving a new foundation to the question of money/currency alone! Social and economic life is well too complex. This first volume, centered as it is on the monetary question will be followed by a second one which should in principle revisit from top to bottom three other domains from which there result problems that invade the economy; they are: capital-shares, labour and real estate/landownership.

Even in the particular field of money/currency, the author (Michel Laloux) does of course not pretend to have once and for all, with his work, “solved” everything[2].

It is not in this way that his approach should be understood, while it aims first and foremost at clearing the terrain and establishing the foundations for a healthy and sustainable structure to come.

And also, no one can imagine that such ideas, which are of the macro-social level, could with one magical brushstroke become reality. It is needed first of all that they penetrate little by little our culture and that they be confronted to what the latter is capable of assimilating, so as to progressively fine-tune the formulations and the communication. Then further should they become subject to trials through « test experimentations”, on a given territory, so that indispensible and progressive adjustments can happen before developments on a larger scale. To do so, there should be able to exist in a kind of way a “right to experiment”, which allows, in all legality, to suspend the effects of a certain law, decree, order, and judicial decision in favour of experimentations of new institutions, enterprises and organisations.

And this already so that this second phase of evolution could be attained, so that citizen could have the possibility to intervene directly within the domain of law, for the purpose of proposing new ones or to change old ones as well as those which the parliament seeks to adopt. It would thus be about obtaining hereby what the author calls « the vital minimum of democracy”: the right of legislative initiative and the right of citizen legislative referendum, such as in Switzerland, which is currently the only country in the world who posses those integrally.

The obstacles, hindrances and issues mentioned here above (as well as in Michel Laloux’ the book – where he also offers solutions in this regard) are certainly quite considerable. Rather then prompting to drop the arms, they should constitute as many invitations to concentrate all efforts as directly as possible towards what isessential, and leave what is incidental on the side.

According to us, the ideas expressed in this book are part of what is essential in life.

In short, a work to be read absolutely… all “business as usual” ceasing.

[1]Michel Laloux has published  « Démocratie Évolutive » (2007) et « Dépolluer l’économie – Tome 1 - Révolution dans la monnaie » (www.democratie-evolutive.fr ). An English translation of this last book is in progress. The publication in English is expected before summer 2015.
[2]Let us note for instance the very complex question of the interfacing, between the old system which would be disappearing little by little and the monetary zones which would in the future be grounded in this new paradigm, for a certain transition period, remains to be deepened and clarified. 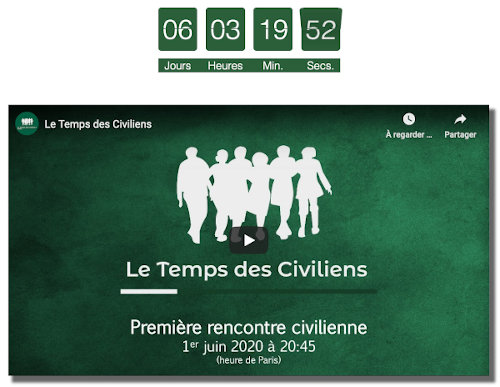